After activating this functionality, your login data (customer number and partner number) is saved as a so called Cookie on your local file system. We recommend to use this function only if no other users are working with this computer, tablet or smartphone. In generally we suggest: Log out after your purchase.
More information about Cookies can be found in our data privacy statement

What is my customer number?

You will find your Wurth customer number on your Wurth Statement or Invoices. Please feel free to contact our Customer Service Team on 1300 65 77 65. Monday to Friday from 8.30 am - 5.00 pm (not on public holidays).

You are not yet a Wurth customer? You can register online in a few simple steps. Once you have successfully registered, you will have access to all prices and can then place an order. Click on "Register now"..

What is my partner number?

You receive your partner number via email together with your login details when you initially registered with the Wurth eShop. Please feel free to contact our Customer Service Team on 1300 65 77 65. Monday to Friday from 8.30 am - 5.00 pm (not on public holidays).

What is my login name?

You can set the login name after logging in in the "My account" area. If you have not yet assigned a user name or have forgotten it, please use your customer number and partner number to reset the password.

The password must be at least 10 characters long. The longer the chosen string, the harder a password is to crack. We recommend 16- or even 20-character passwords. All available characters can be used, for example upper and lower case letters, numbers or special characters. If you also use umlauts, please bear in mind that they may not be entered on keyboards for other languages. Names of pets or relatives, dates of birth, etc. are not suitable passwords. In addition, the complete password should preferably not appear in dictionaries and should avoid common variants and repetition or keyboard patterns such as "qwertz" or "1234abcd".Your customer number can not be used as password. 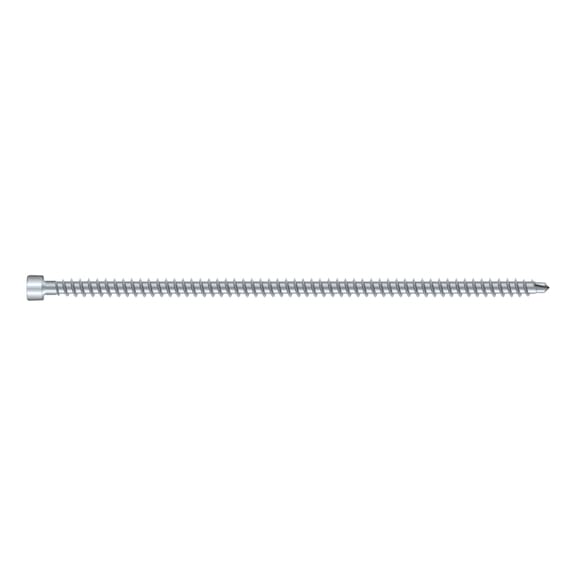 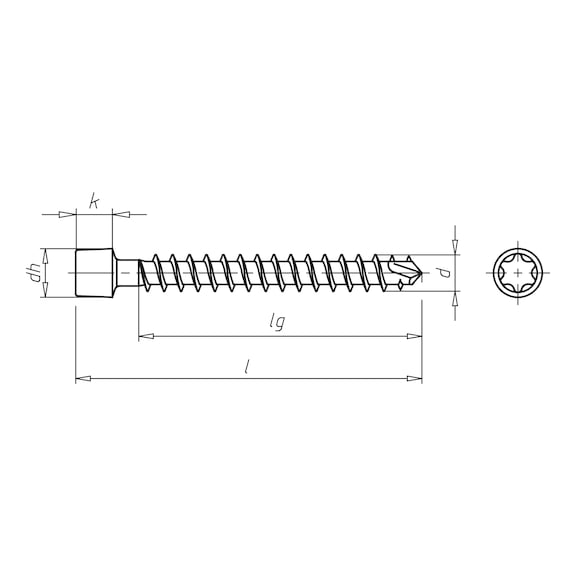 For detailed information, other images and documents, please select individual articles from the following table. 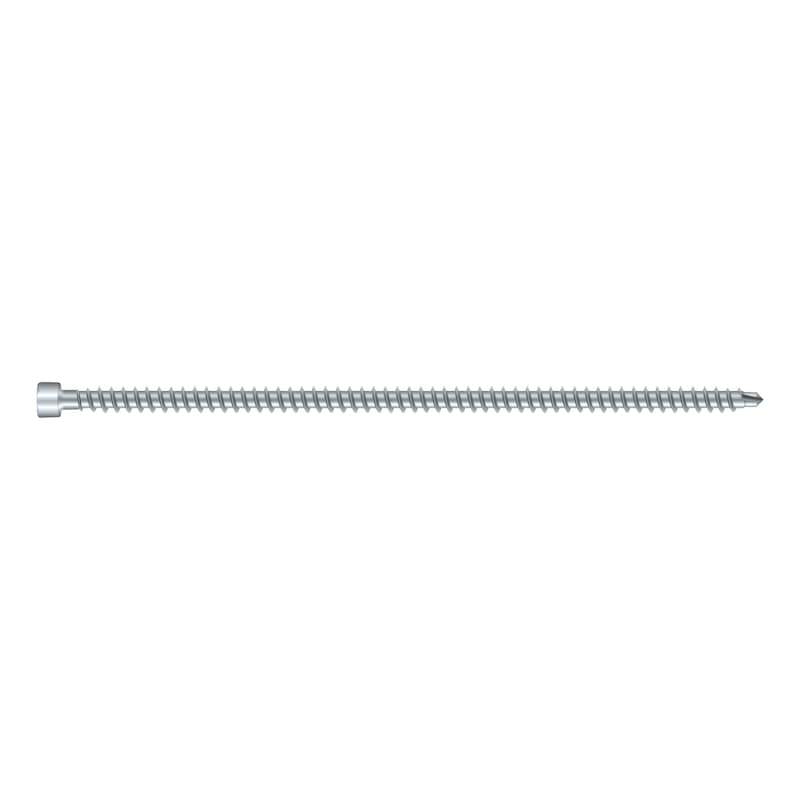 Full-thread screw that can be used universally within the new construction and renovation sector for timber construction, carpentry, timber house and element construction.

Prices for customers after login

We have even more product recommendations for you.

Prices for customers after login

Cylinder head for universal use

The requirements of the European Technical Approval must be observed.

You can use the Würth timber dimensioning software (online or download for offline work) for an individualised structural recommendation. For simple standard applications, please refer to the calculation tables. Ask your sales representative for your free copy.

ASSYplus FT is a full-thread screw that can be used universally within the new-build and renovations sector for timber construction, carpentry, timber house and element construction. Reinforcement connections, lateral compression or lateral tensile reinforcement.

Reinforcement for preventing failure of glued trusses or other supports by exceeding the tensile strength of the wood can be carried out quickly and reliably with the ASSY plus FT. Compared with conventional reinforcements such as glued-in threaded rods or side beam reinforcements using wooden material panels, this enables visually appealing solutions and significantly reduces the required assembly time.

The weak point when connecting main and secondary beams with moulded metal parts is the top centre connecting row of the nails (danger of cracking). The lateral tensile reinforcement of the main beam using the ASSY plus FT in the joist hanger area can eliminate the risk of lateral failure.

With a truss support, the ASSY plus FT absorbs the compressive force to be transmitted. The head, in conjunction with the screw thread, introduces the force into the screws via an intermediate steel plate and distributes it evenly across all full-thread screws in the entire wooden cross-section. The load-bearing capacity of the support is increased and compression of the wooden cross-section is avoided.

To date, main/secondary beam connections are made with moulded metal parts, such as joist hangers or concealed beam connectors that are time-consuming to install. The ASSY plus FT full-thread screw provides a time-saving and invisible alternative. By screwing in the ASSY plus FT at an angle of 45°, the screws absorb the lateral forces of the connection. Ideal for application: FT-fix setting template.

It is often necessary to reinforce existing beams or rafters, especially when renovating old buildings. With the reinforcement types of false edge and lateral support beam reinforcement, the ASSY plus FT screw offers effective, cost-efficient technologies for increasing load-bearing capacity of the beams and reducing bending.

ASSY plus FT is the optimum problem-solver in prefabricated house construction as well. Thanks to the full thread, it can absorb significantly greater tensile, pressure and shear loads. The connection is therefore not limited due to exceeding the head pull-through resistance. The drill tip ensures that the substructure does not splinter or crack during screwing in when the short edge distances are complied with, which is often the case with screws without a drill tip.

Current rafter-purlin anchors require time-consuming assembly and also have a low load-bearing capacity. The ASSY plus FT is therefore an effective alternative with benefits in terms of assembly time. The existing weak point of an ASSY 3.0 countersunk head screw or an ASSY 3.0 SK, the head pull-through, can therefore be ignored with the ASSY plus FT. The result is a lasting connection even if the wooden cross-section subsequently dries out and shrinks.

In the construction of commercial and industrial buildings, the rafter-supporting purlins are generally formed as coupling purlins. The single-field beam coupling is used to create multiple field beams. The load-bearing capacity is increased and, in return, smaller material cross-sections can be used. With help, a quick and easy connection can be created. An ASSY SK screw (consolidation) and, depending on the load, ASSY plus FT screws, 6 or 8 mm in diameter, are inserted at right angles at each connection point. Pre-drilling is not necessary. The wood cross-sections can be kept small due to the short edge distances of the ASSY plus FT. Compared to a plate dowel assembly, the elaborate setting of dowels and bolts is eliminated as is the need to subsequently tighten the bolt nuts correctly. A powerful cordless drill is all that is required for installation of the screws.

When designing houses with a timber frame construction, it was previously the norm to produce the walls in a floor-to-ceiling structure. The ceiling beam position therefore lay on the wall frame of the lower storey in each case. As a result, the air-tight level and the outer wall insulation were penetrated by the beam. Therefore, there is an increasing tendency to have the outer walls traverse above storey level. Thanks to edge beam fastening with ASSY plus FT full thread screws, the fastening of the footing beams/edge beams for securing the ceiling can now be produced quickly, efficiently and easily in the form of a simple shear connection. With this design version, the screw-in template FT-fix is also suitable for adjusting the screw-in angle and the screw spacing.

There is hardly any old building with wooden beam ceilings that is completely free of damage on its load-bearing ceilings. Wood integrated in the masonry can be infected by fungus or insects. The beams have rotted off or are heavily damaged at the point of support. Using laterally bolted reinforcing lugs, these points can be quickly and easily renovated and the load-bearing capacity of the beams is restored. This eliminates the need to completely replace the damaged beams.

To create a simple traditional beam dowel connection, high assembly precision is required. In practice, this often leads to implementation problems. A visually cleaner and financially attractive alternative is the creation of double-shear wood/wood connections using ASSY plus FT screws. Installation differences can easily be compensated for with equivalent load-bearing capacities. Compared with the beam dowel connection, a smaller diameter is required due to the beneficial impact of the screw's hooking effect.

Ceiling renovation employing a wood and concrete composite is the optimum method for increasing the load-bearing capacity where the beam spacings and support widths are particularly great, or where there are very high rated loads. Here, partly screwed-in full-thread screws serve as shear connectors and absorb the shear flow between the wooden beams and concrete slab. This eliminates the time-consuming installation of shear connectors made from expanded metal. ASSY plus FT has its own European Technical Approval (ETA13/0029) for this method

Selection is required for an order